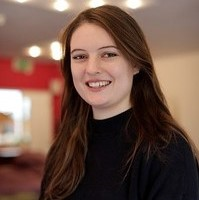 Organic emitters exhibiting delayed fluorescence (DF) are promising luminescent materials for next-generation organic light-emitting diodes (OLEDs). Faster intersystem crossing rates and shorter emission lifetimes can be achieved in luminescent molecules through the incorporation of heavy atoms, which enhance spin–orbit coupling and promote intersystem crossing between singlet and triplet states. DF molecules often contain a sulfur atom, and reports of selenium-containing DF OLEDs also exist. However, the literature lacks a direct exploration of the effect of spin–orbit coupling on reverse intersystem crossing in a delayed fluorescence emitter by the substitution of selenium for sulfur. Here we show that substitution of selenium for sulfur in a modified thioxanthenone-triphenylamine analogue increases the rate of forward intersystem crossing by a factor of over 250 and the rate of reverse intersystem by a factor of 22. We attribute the increased rates to enhanced spin–orbit coupling from heavy atom substitution, and computational and electron spin resonance studies support this. This work provides an insight into future molecular design strategies for heavy-atom-containing, DF emitters.